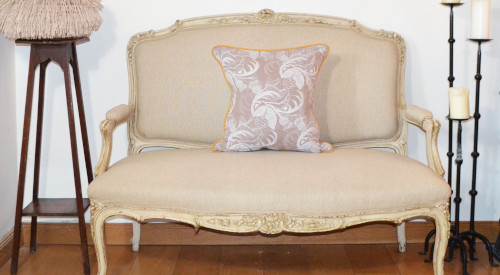 This year’s Henley House & Garden Show had a young talent in its midst, showcasing an ancient art. Albert Harvey, 28, is a textile block printer whose muse is the Oxfordshire countryside around Henley. Cindy Burrowes went to meet him in his rural workshop.

Albert Harvey was notable at the Henley House & Garden Show this year for the beautiful, simple prints on the heavy, linen fabric made into cushions and lampshades. He was also notable for his youth and warm enthusiasm for the art of block printing – and confidently introduced his Henley audience to his work.

“I couldn’t believe how packed it was, I sold quite a lot on the Saturday, met lots of people, it was a great atmosphere, there are lots of people in Henley doing creative things – it was amazing,” he said, dark eyes twinkling.

Albert works in a quiet workshop in a barn at the end of a garden in Exlade Street. He told me: “I started at college – I love print making and I always liked interiors and then a technician there introduced me to English block printers – Barron and Larcher [20th Century] and I just completely fell in love with that. She took me under her wing, and introduced me to the print room. It was amazing.”

From there Albert’s new found passion took him to the Bath School of Art and design at Bath Spa University where he was immersed in all forms of textile work for three years. He even had to learn to knit, weave and do embroidery.

Printing on fabric included the modern way of printing using digital technology to transfer an image to fabric. Albert was only able to concentrate on block printing on fabric in his last year – and by then it was still his favourite method of working.

To explain – the pattern was traditionally carved into blocks of wood, which were then dipped into the dye, and hand pressed onto the fabric. Anyone who has visited the recent River & Rowing Museum’s William Morris exhibition will have seen Morris’s blocks, and a detailed explanation of this technique.

Albert also spent six months travelling in India, particularly Jaipur, where the hand block printing is famous the world over. Following this he came home and set himself up as an artisan hand block printer.

“It is an ancient art – digital printing is against what I love doing because I love the personal touch of a hand printed fabric,” said Albert.

“Each piece is unique because nothing can be perfect, each one is slightly different. Which is always the good thing about it, when you get the block you can just play around with it.”

However, where Morris’s inspiration was often the River Thames, Albert’s is the countryside where he has grown up – the thistles, sedge and wildflowers of the Brightwell’s and the Chiltern ridge. Each print is named after a village, and he now has six primary designs to his name, which he uses in a variety of ways.

“They are plant-based designs from my surroundings – I spent two years in a barn workshop in Brightwell Baldwin so many are from my walks around the fields there – it is such a beautiful place.

“I love to use a mix and match of flora within each design, for example combining the leaves of daffodils with the head of a thistle, I also like to play around with scale within each motif and usually add small geometric shapes adding contrast to the natural shape of flora within the design.”

Albert explains that instead of wood blocks he carves his designs into large pieces of lino (lino cut) because this material is a lot more flexible than wood. And also he can use the cut, which can take up to a week to carve, in different coloured dyes. Each print is then unique depending on where he has placed it on the linen fabric.

Albert’s work is beginning to be in demand, because each print is, in fact, a work of individual art. He recently completed his second set of 16 cushions for a ski chalet and has been commissioned to design a print for a house renovation using the plants in the garden of the house.

Albert’s fabrics can be seen in Watlington gift and design shop, Stilla Hem, at his family’s pub, the Nelson in Brightwell Baldwin, or through
www.albertharvey.co.uk

“I’m a printmaker and textile designer using lino printing to transform my drawings into a repeat print on fabric. All my inspiration is influenced by the beautiful Oxfordshire countryside.”