A day at the races 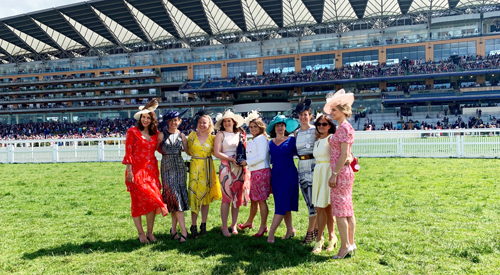 Royal Ascot has long been an established week of fashion and mingling during the Great British Season. Cindy Burrowes reports back from the local racecourse that comes under the world’s focus for one week a year.
Over the years I have occasionally attended Royal Ascot, usually with my parents. This year, however, was a different story as my other half now works in the world of horserace betting so not one, but three days attendance were required over the week. Three days of different outfits, but the same, flat shoes. And three days of meeting many new people and talking, a lot. I have even more admiration for HM The Queen, who managed five days, at 93 years old. However, she, like many of the people I met (two MPs, the most successful horseracing gambler in the world, trainers and jockeys) are united by a love of the Sport of Kings. So this race meeting, along with Cheltenham, has a truly wide range of humankind within its hallowed gates from the aspirational social climber, to the true aristocrat, or the hardworking person who lives for this annual outing.
When it comes to backing a winner, they are all equal in the game of chance, knowledge, or in the case of the aforementioned betting genius, in the understanding of the theory of probability. And at the heart of it, is a rather dingy control room that could be a million miles away from the corporate hospitality boxes, flower bedecked restaurants and glittering bars of the New Stand and its surrounding concourse.
However, this is where the money is generated because this year the week’s bet pool was ‘co-mingled’ with the wagers from the Hong Kong Jockey Club. The races were live streamed to the other side of the world, and the result was that the co-mingled wagering resulted in £92 million pounds worth of bets placed over five days. And my £18.50 Placepot total, for which I had to have a lesson from a professional, Josh Apiafi, did not result in a bean. To me the vast amount of money bet during the week is astounding, and rather terrifying because at the heart of the event are horses, which are beautiful, graceful spirits. I have always loved them so it was with joy that I had a conversation with a fascinating character who described being in the presence of the great racehorse Frankel. Frankel was bred at Crazies Hill at Juddmonte Stud, four miles from Henley and trained by the great Henry Cecil. The thoroughbred was unbeaten in his 14 year career and is acknowledged as one of the very greats. But this erudite, flamboyant racing lover could have been describing Sir Winston Churchill or Freddie Mercury in terms of charisma.
Meanwhile, Taiwanese supermodels, Russian entrepreneurs and the most royal of royals tottered by on their high heels, sinking in to the soggy ground after a week of unprecedented rain. The racing results were skewed because the ground was so unusually hard going. My flat shoes won, as did the two cleverly crafted, stable and wearable headpieces that the wonderful Liz Felix had provided to go with my ‘recycled’ frocks of questionable providence. The weather meant that some days it was difficult to get lovely photographs, and see what everyone was actually wearing. But on the Saturday, a more relaxed, but equally dressy day, dawned bright and breezy. The colours were bright yellows, pastel pink and blue. Florals abounded, and many lace panelled dresses. And there were a lot of ruined shoes. Next year, I believe my duties will take over the full five days of Royal Ascot. I am investing in comfortable, durable shoes as we speak.