A life in drawings 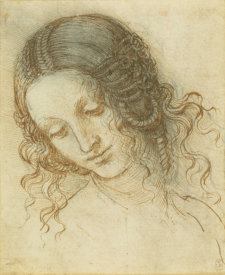 To mark the 500th anniversary of the death of Leonardo da Vinci in February this year, 144 of the Renaissance master's greatest drawings in the Royal Collection went on display in 12 simultaneous exhibitions across the UK.

Leonardo da Vinci: A Life in Drawing, a nationwide event, gives the widest ever UK audience the opportunity to see the work of this extraordinary artist. Twelve drawings selected to reflect the full range of Leonardo's interests – painting, sculpture, architecture, music, anatomy, engineering, cartography, geology and botany – are showing at Royal Collection Trust partner venues around the country.

However, in May the drawings will be brought together to form part of an exhibition of more than 200 sheets at The Queen's Gallery, Buckingham Palace; the largest exhibition of Leonardo's work in more than 65 years. A selection of 80 drawings will then travel to The Queen's Gallery, Palace of Holyroodhouse in November 2019, the largest group of Leonardo's works ever shown in Scotland.

Revered in his day as a painter, Leonardo completed only around 20 paintings; he was respected as a sculptor and architect, but no sculpture or buildings by him survive. He was a military and civil engineer who plotted with Machiavelli to divert the river Arno, but the scheme was never executed. He was an anatomist and dissected 30 human corpses, but his ground-breaking anatomical work was never published. He planned treatises on painting, water, mechanics, the growth of plants and many other subjects, but none was ever finished. As so much of his life's work was unrealised or destroyed, Leonardo's greatest achievements survive only in his drawings and manuscripts.

The drawings in the Royal Collection have been together as a group since the artist's death, and provide an unparalleled insight into Leonardo's investigations and the workings of his mind. Leonardo firmly believed that visual evidence was more persuasive than academic argument, and that an image conveyed knowledge more accurately and concisely than any words. Few of his surviving drawings were intended for others to see. Drawing served as his laboratory, allowing him to work out his ideas on paper and search for the universal laws that he believed underpinned all of creation.

The exhibition Leonardo da Vinci: A Life in Drawing will include examples of all the drawing materials employed by the artist, including pen and ink, red and black chalks, watercolour and metalpoint. They will also present new information about Leonardo's working practices and creative process, gathered through scientific research using a range of non-invasive techniques, including ultraviolet imaging, infrared reflectography and X-ray fluorescence. Leonardo used ink made from oak galls and iron salts, which is transparent in infrared light, allowing his black chalk underdrawing to be seen for the first time. Examination of A Deluge,c.1517–18 (to be shown at the National Museum Cardi?) revealed that beneath the pattern-like arrangement of rain and waves in brown ink Leonardo drew a swirling knot of energy in black chalk at the heart of the composition.

All the drawings by Leonardo in the Royal Collection were bound into a single album by the sculptor Pompeo Leoni in Milan around 1590 and entered the collection during the reign of Charles II. What appear to be two completely blank sheets of paper from this album will be on public display for the first time at The Queen's Gallery.

Examination in ultraviolet light has revealed these sheets to be studies of hands for the Adoration of the Magi, c.1481 and is among Leonardo's most beautiful drawings. He executed the studies of hands in metalpoint, which involves drawing with a metal stylus on prepared paper.

Martin Clayton, Head of Prints and Drawings, Royal Collection Trust, said: “The drawings of Leonardo da Vinci are a national treasure, both incredibly beautiful and the main source of our knowledge of the artist. We hope that as many people as possible across the UK will take this unique opportunity to see these extraordinary works, which allow us to enter one of the greatest minds in history, and to understand the man and his achievements.”