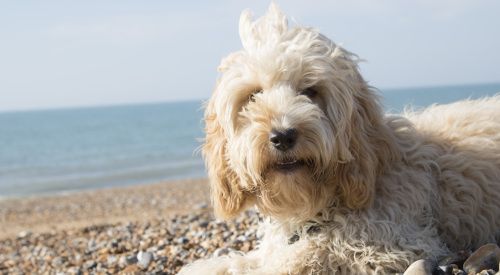 Do you know your Schnottie from your Puggle? Gail Perera takes a look at the assorted mutts available these days…

At one time pure breeds were the pet of choice for most dog connoisseurs. These days dogs coming from a mix of two breeds are hugely popular. This designer dog trend can be sourced back to Labradoodles, created by Wally Conron, the breeding manager for the Royal Guide Dog Association of Australia.

In the 1980s Wally was asked to produce a puppy for a Hawaiian couple; the woman had vision problems and was in need of a guide
dog, but her husband was allergic to most dogs.

Wally decided that the best solution would be to cross the traditional Labrador with a Standard Poodle and create an animal with non-shedding, non-allergy-causing hair.

Initially, these crossbreeds were of little interest to most dog owners. But when his creation was given a catchy new name the phenomenon that is the Labradoodle was born.

By the turn of the millennium these big fluffy mutts rapidly became the ‘hot dog’ to own, with would-be owners desperate to part with substantial sums of cash to acquire a puppy. Jennifer Aniston, Tiger Woods, Graham Norton and Jeremy Irons all succumbed to the allure
of the Doodle.

I also found myself heading up the M6 motorway three days before Christmas 12 years ago to pick up our very own
Labradoodle puppy, Jasper.

Our cute little black ball of fur grew rapidly into a very large and slightly comical-looking creature with the slim legs of his poodle mother and the solid body of his Labrador father. Yet apart from his ‘terrible teens’ period at around seven or eight months, when he simultaneously discovered both his strength and his teeth, he was an excellent pet.

Five years later Charlie the black Cockapoo joined the family. A mix of Cocker Spaniel and Poodle, he is a terrific little dog with oodles of personality and an eccentric obsession with squirrels.

Dog walks have certainly taken on a whole different dimension these days when out and about.

‘Guess the Crossbreed’ is a common game around local parks and woodlands.

Complete strangers will stop you in your tracks and launch into animated debates about the pros (never cons) of their designer pooches. Owning one of these fascinating hybrids gives you automatic membership of ‘The Club’.

For the last 20 years this crossbreed obsession has shown no signs of slowing down and is now a global fashion popular with everyone except perhaps pedigree breeders.

The Kennel Club has expressed concern that the huge demand for designer hybrids may cause unscrupulous breeders to take advantage of the trend. However, even though these crossbreeds may prove to be less predictable in nature than pedigree dogs, they do seem to be healthier and less prone to genetic defects.

A Jack Russell/ Pug cross or Jug, for example, will combine the hardiness of the Jack Russell with the distinctive Pug looks while at the same time eliminating the Pug’s health issues caused by years of inbreeding.

Walk anywhere these days and you are more likely to see a designer crossbreed than a pure pedigree. A high percentage of these dogs will be Poodle crosses. Not surprising when the benefits of the non-shedding coat are added to the breed’s superior intelligence.

From my own perspective, having replied “Jasper is a Labradoodle and Charlie is a Cockapoo” for the umpteenth time, my response began to feel quite pedestrian in comparison to the names of the new dogs on the block. Imagine having to repeat ‘oh, he’s a Gerberian Shepsky’ or ‘Jemima is a Jaffanorkie and Sybil is a Schnottie’.

Maybe the Kennel Club has a point!