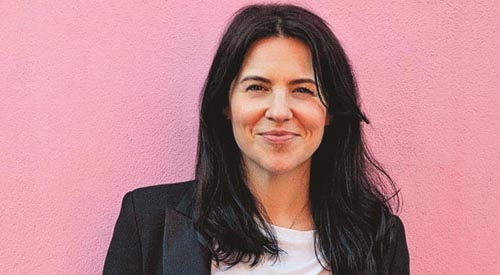 Steph Douglas is a regular visitor to Henley as an interviewer for its literary festival. She is also a significant presence on Instagram (59K followers) as a busy, but honest, mother of three who seven years ago set up a thoughtful gift business ‘Don’t Buy Her Flowers’ (www.dontbuyherflowers.com). Cindy Burrowes asked Steph a few questions on behalf of Henley Life readers who may also be busy parents, with their own businesses:
Why did you start ‘Don’t Buy Her Flowers’?
The idea came when I had my first baby and received eight bunches of flowers. I felt overwhelmed and exhausted and these lovely bouquets kept arriving from well-meaning family and colleagues, but they made me feel even more overwhelmed. It struck me as bonkers that the go to gift for new mums was another thing to care for, when she's doing more caring than she's ever done in her life. Motherhood is amazing and a privilege but I felt that new mums need some TLC and looking after. Our most popular package when we launched was The Care Package, with tea and flapjack and chocolates and a magazine and a scarf -- just lovely things to let someone know you're thinking about them. We started as gifts for new mums, but very quickly customers wanted to send packages for lots of other occasions, from bereavement and get well to birthday.
At what stage of your life did you do this? Was it a convenient time?
Well I didn't do it with a newborn, which I think is important to mention. I had the idea when my first was born but didn't launch it until four years later. I had two small children so it was hard work, but I think those first years with a business are always going to be, whatever stage you're at. Getting something oﬀ the ground requires a lot of work and when you're on your own, it all sits with you and it can feel overwhelming. But I could work around the kids, I could get them to bed and get the laptop back out or pack orders, and we made it work.
Your business has been successful. But what would you have done diﬀerently?
We've been going almost five years and it's going really well. We've grown month-on-month since launch. We moved operations out of the house after two years and we're now a team of ten along with some freelancers. I had another baby in 2017 and we've grown at the right pace for us, so I wouldn't actually do it any diﬀerently.
What advice would you have for a busy mother wanting to set up her own business?
Don't try and do everything you did before and run a business on top. Something has to give, so that might be your social life, cleanliness standards, and everyone eating beans on toast for tea again, but it's a means to an end and if you're in this for the long haul, you don't want to burn out six months in.
You came here last year for the Henley Literary Festival --what was your impression of the town?
Oh it's beautiful. We went on a gin-boat trip with Mr Hobbs and the kids loved the playground by the river. They also loved the talks for children at the literary festival, especially Rob Biddulph, who was brilliantly engaging and got them all sketching.
STEPH’S TOP FIVE BOOKS TO READ NOW:
David Nicholls Sweet Sorrow
Michelle Obama Becoming
Laura Thomas Just Eat It
Zadie Smith Swing Time
Annabel Rivkin & Emilie McMeekan I’m Absolutely Fine: A Manual for Imperfect Women