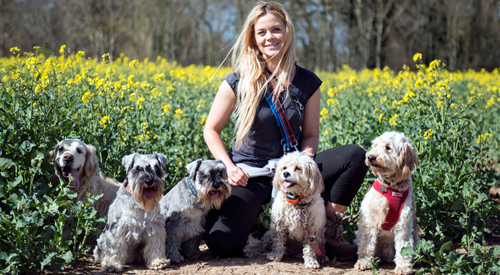 In 2020 Henley is home to a variety of businesses, large and small, covering everything from the industrial to the bespoke. Many of these enterprises are owned and run by women and Henley Life has met with some to celebrate International Women’s Day.
International Women’s Day has been celebrated on March 8 every year since 1910. In the past 100 years women have come a long, long way.  In May of 1910 Queen Victoria’s eldest son Edward VII died and passed the throne to George V.  Women at that time, both rich and poor, were little more than chattels with few rights.
Women had no vote, even though the National Society for Women’s Suﬀrage was formed almost 40 years earlier in 1872.  In the early 1900s there were lots of diﬀerent women’s groups campaigning for ‘Votes for Women’ and from the modern perspective we tend to lump them in together as Suﬀragettes. Some of the more famous women of that time, like the Pankhursts (Emmeline, Christabel and Sylvia) were pursuing a campaign of action and militancy – breaking windows, setting fires, deliberately getting themselves arrested and subsequently going on hunger strike.  In 1913 Emily Davison famously threw herself in front of the King’s horse at the Derby, and died from her injuries.
When the Great War broke out in 1914 the Suﬀragettes quit their more provocative tactics in order to support the war eﬀort. When the war ended in 1918 women finally got the vote, well the ‘right sort’ of women did. The Representation of the People Act (1918) gave the vote to every man aged 21 and to women aged 30 who met minimum property requirements.
As a result of the 1918 General Election the first woman was elected to Parliament. Countess Markievicz (née Constance Gore Booth) was an Irish revolutionary who refused to take her seat.  In the following year, Nancy Astor won a by-election and became the first woman MP to sit in Westminster. It wasn’t until 1922 that other women were elected and in later years Astor described her early years as an MP as “hell”. In 1928 parliament changed the law to allow both women and men aged 21 to have the vote.
Although women could now vote, the business world was still heavily biased against them.  The ‘Marriage Bar’ – a rule vetoing the hiring of married women (and often widowed women) existed in some industries until as recently as the 1970s.  The ‘Marriage Bar’ also required women to resign from certain jobs – often in the Civil Service and banking, once they married.
Women are still underrepresented in both business and in parliament which makes our Henley Women in Business even more exceptional – they are bucking a national trend and succeeding whilst doing so. In this month's issue, meet some of our fantastic Henley Women in Business including Ailsa Bosworth MBE who founded the National Rheumatoid Arthritis Society, Debbie Atkins who turned redundancy into opportunity, lawyer Punam Denley who started her post-divorce life by launching her own law firm and Suzie Hobbs who has helped steer the well-known Henley boat firm into new (tonic) waters by launching Mr Hobbs Gin.
AILSA BOSWORTH
Ailsa Bosworth founded the award-winning charity the National Rheumatoid Arthritis Society (NRAS) in 2001, following a struggle to access the treatment she needed. She received an MBE for services to people with rheumatoid arthritis in the 2016 New Year’s Honours List. Based in Maidenhead, NRAS is the only patient organisation in the UK with a specific focus on providing support and advocacy for the 400,000 people with rheumatoid arthritis and more than 12,000 children and young people with juvenile idiopathic arthritis. Ailsa led its development into an internationally respected and influential membership organisation for 18 years, before standing down as CEO in June 2019 to take on a new, parttime role as National Patient Champion (NPC), and to have more time to devote to her family.
As NPC, she contributes regularly to national and European guidelines and standards. NRAS is leading the way in the provision of supported self-management services and resources in rheumatoid arthritis, and Ailsa is currently developing a unique new e-learning programme, so that many more people can access the help they need, easily and conveniently. Name: Ailsa Bosworth MBE
Charity: National Rheumatoid Arthritis Society (NRAS)
Position: Founder and National Patient Champion
Website: nras.org.uk
Telephone: 01628 823524
PUNAM DENLEY
Punam Denley set up Blanchards Law eight years ago, a family law practice.
“My intention was to spend more time at home with my children in Henley, away from the daily grind and commute to London,” she says. “I had recently been divorced myself, and my new partner (now husband) encouraged me and gave me the belief that I was capable of running my own business.
“He has been my mentor, my constant supporter, cheerleader and shoulder to cry on during those few tough moments.
“I probably ended up devoting less time with my children in the early years, and I think I was pretty naïve about that. Now that my firm is established, I’d like to think that I have a better work/life balance, and I hope that I am a good role model for my children, now in their teens with their own challenges.
“I never believed that it was possible to ‘have it all’ as a working mother, and that has not changed over the years.
“I recall the guilt about leaving my little boy in nursery when he was eight months old, but he doesn’t remember anything!
“A properly funded childcare system would make a dramatic diﬀerence to families’ lives, but that seems a long way oﬀ, and many companies are the poorer when their employee feels that they have no option but to leave to look after their family. “I want to create a better working environment in my company, and to support them when they need it. Having also experienced marital breakdown myself, I can have particular empathy for my clients’ situations.”
Name: Punam Denley
Company: Blanchards Law Ltd
Position: Partner, Solicitor, Mediator & Collaborative Lawyer
Website: blanchardslaw.co.uk
Telephone: 0845 658 6639
Email: pd@blanchardslaw.co.uk

For the past 11 years Laura Poole has owned and run Woofits Walkies --a friendly, professional dog walking service with doggy daycare and puppy visits around the Henley area. Having always loved and wanted to work with animals, and having a particular passion for dogs, she took a part-time position with a dog walking company called TwoDog whilst attending BCA college studying Animal Care. The owner Helen Whitaker eventually decided to sell up and so she took it on, expanded and it became Woofits Walkies.
Laura says: “I am grateful to have had a lot of support and encouragement from family and friends while developing a business I love.” She is incredibly proud of her company and the hard-working, conscientious team she has working for her. She continues:  “Over the years I have met some great people and enjoyed connecting with mutual doggie lovers and of course all the amazing doggies.”
Laura says she loves to support the community in any way possible and was so touched by the amazing turnout for her charity dog walk last year for the Sue Ryder Hospice in Nettlebed. She is organising another walk this year and looking forward to welcoming an even bigger procession of walkers and woofits.
Website: www.woofitswalkies.co.uk
Facebook: www.facebook.com/woofitswalkies
Tel: 01491 682580
Mob: 07947 828 367
Email: dogslife@woofitswalkies.co.uk
REBECCA SUMMERFIELD
Rebecca joined Philip Booth Esq, a local boutique estate agents, in 2019. Having grown up in Sonning, Rebecca moved to London after studying English Language and Literature at university to embark on a career in advertising and has worked with the directors of some of the
largest brands worldwide. Having started a family, Rebecca moved back to Berkshire, realising the commute into London was challenging. Rebecca combined her passion for property, interior design and face-to-face communication by seeking a career in real estate.
Rebecca says: “Being a mother and still managing to have a successful career was something I also wanted to do.
“Phil has provided me with a wonderful opportunity and I can honestly say I’m the happiest I have been for many years.
“When you work to a very senior level in any industry and have to potentially give up all that you have achieved, it is extremely diﬃcult, both personally and financially.
“Working with Phil is one of the best experiences I have had, not only because I respect him as a person, but what he has achieved is nothing short of admirable and I am proud to represent his business.”
Phil Booth says: “As a family man myself, I am a strong advocate of flexible working arrangements.
“The world we live in is no longer just nine to five and many families need to have two sources of income and traditional gender roles have become more flexible. “It should no longer be the case that you should sacrifice your career, while looking after your family. I was happy therefore to work with Rebecca in creating a role that works with her current family situation, which I hope will evolve over time.
“We have a strong ethos of providing a highly personal service at Philip Booth Esq. The feedback I have received, from our customers, about Rebecca has been consistently positive and I believe she represents my company with energy and enthusiasm.”
Name: Rebecca Summerfield
Position: Senior Negotiator, Philip Booth Esq
Tel: (01491) 635343
Email: rebecca@philipboothesq.com Website: www.philipboothesq.com