Life at the real Downton Abbey 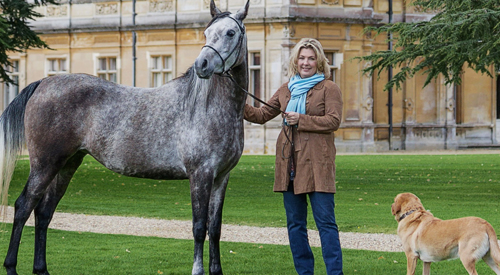 Downton Abbey is big news, having just released a feature film about the intrigues of the grand Crawley family and their staﬀ living in their stately home. The magnificent house itself takes centre stage and is, in reality, Highclere Castle, West Berkshire, the ancestral home of the Carnarvon family. Henley Life’s Amanda Stewart rides out with Lady Carnarvon and asked her a few questions about life at Highclere, and the impact of Downton Abbey.
You are just back from New York from the premiere of Downton Abbey film. What was that like and is walking along the red carpet as fabulous as we all think it might be?
We were absolutely thrilled to be invited and thoroughly enjoyed both the London and the New York premiere. It was wonderful to see all of the Downton cast dressed so elegantly. We took our places, with popcorn naturally, the credits started rolling up, the distinctive music began and as the image of the castle appeared in a beautiful golden opening shot, everybody cheered and clapped. It was a really wonderful moment which I shall certainly remember.
How did you first become involved with the filming of Downton Abbey?
Julian and Emma Fellows are friends and had stayed with us at Highclere. Julian wrote Downton Abbey with Highclere in mind as he knew the layout so well and knew that the particular arrangement of the rooms – both upstairs and downstairs – would lend themselves well to dramatic entrances and set pieces.
Do you have a personal favourite character in Downton Abbey?
Yes – the castle ! I would, however, say that, more than individual characters, I enjoy the relationships Julian creates, such as the dynamic that exists between Anna and Bates or Lady Violet and Mrs Crawley.
Highclere Castle is now firmly on the map, how do you find the increase in visitors?
Highclere Castle has been on the UK tourist map since my husband and his father, the 7th Earl, opened it to the public in 1988, at which time there were longer queues than following Downton Abbey. When Geordie and I opened our Egyptian Exhibition in 2007 to celebrate the discovery of Tutankhamen’s tomb by the 5th Earl of Carnarvon, this again generated a lot of interest.   It is certainly true, however, that Downton Abbey has, once again, given us an international audience and we welcome visitors from all around the world.
Have the increased visitors helped with any one particular restoration or something else?
We have dozens of renovation and repair projects on the go at any one time – some on the castle itself and others on the estate.  We are in the process of restoring a medieval barn – the oldest in Hampshire – which was last rebuilt in 1438.
How much time is taken up with film crews visiting?
This summer we have welcomed TV crews from all over the world who want to see and capture a little glimpse of what life is like here and what goes on behind the scenes of Downton Abbey. When they were filming the television series, the cast and crew would be with us from February to July each year, whereas with the film they were only here for six weeks.
Having joined in the filming at Downton / Highclere as a side saddle rider in a hunt scene – it was very interesting to see and meet the cast – although my eyes were led over to you on your horse(s) as you rode around the estate. Do you still have horses and if so are they for pleasure riding of something else?
We do have a couple of brood mares and some young thoroughbreds, which were born here on the estate and will go into racing. We also have an Arab, a Connemara and a Andalusian for riding. I try to ride out twice a week, if my schedule allows.
Do you have any dogs and do they behave themselves?
We have nine dogs – five Labradors and four Cocker Spaniels. Mostly they are very well behaved, but the Labradors in particular are partial to any food that might be around. They loved having the film crew here as there were lots of scraps from the catering van and lots of cuddles from the crew, my calls to retrieve them often falling on deaf ears!
How many staﬀ does it take to run Highclere Castle and help in general?
We have about 60 staﬀ who work with us in the castle and across the estate. We have a head butler Luis, three under butlers, housekeepers and maintenance staﬀ who look after the castle. We have gardeners, a farm manager and workers who tend to the 5,000 acre estate and farm and then we have oﬃce staﬀ who handle bookings, the gift shop, marketing and accounts. In the summer, the number doubles as we employ tea room staﬀ and castle guides.
You spoke recently about a ghost in Highclere – is this fake news?
There are a number of ghosts at Highclere Castle who reside on various floors. I tell the story of one – a footman – in my book ‘Christmas at Highclere – Recipes and Traditions from the real Downton Abbey’.
You are due to visit us in Henley, will you be discussing the competition to win the exclusive night staying at Highclere as this sounds totally unique?
It’s an absolute privilege and pleasure to call Highclere Castle my home and I am delighted to be able to share it on Airbnb for a truly
unique stay. Highclere Castle has been in the Carnarvon family since 1679 and has an incredibly rich history. I am passionate about the stories and heritage of Highclere Castle, and I am looking forward to welcoming our future guests.
Lady Carnarvon will be taking part in Henley Literary Festival  and doing book signings on Wednesday October 2 at the Christ Church, Reading Road, Henley, at 4pm.