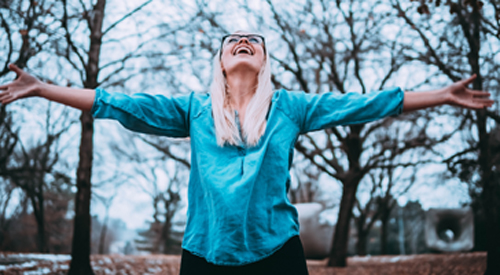 For some women Mother’s Day is a form of torture. Having to sit in a hot restaurant, smile and pretend to be having the best time, when they’re sweaty, uncomfortable and want to rip someone’s head oﬀ.  Welcome to the menopause writes Ann Marie Scanlon.
It used to be called ‘the change’ and with good reason as the menopause not only changes a woman’s body but can leave her acting and appearing like a diﬀerent person. It’s only very recently that women started speaking openly about the menopause and this is a very good thing. Women owe it, not just to themselves, but to their partners, children and younger women to talk about menopause because it can aﬀect everyone in a menopausal woman’s life.
Many of us grow older thinking that the menopause will mean the end of periods (let’s face it, a bonus for most women) and being a bit sweaty. If only. Women can be under-served by the medical community. I was exceptionally lucky, when I presented myself to the doctor with brain fog, an inability to concentrate, migraines (something I had never suﬀered from before) and severe nausea I was sent for blood tests which confirmed the doctor’s diagnosis.  Many women aren’t as lucky with their doctor.  Do your research and ask for the blood test.  It will cut out a lot of misery in the long run.
I compare the menopause to the game Whack-a-Mole – every time a symptom vanishes another pops up in its place. It’s endless and it can be exhausting. The following are symptoms commonly associated with menopause. Every woman goes through menopause in a unique way and may not experience all (or any) of these.
Hot flushes and night sweats
The symptom most associated with menopause and the one which aﬀects approximately 75% of women. A hot flush can be mild – a bit hot and sweaty, to severe – your clothes and hair stuck to you like you’ve been standing in heavy rain. Night sweats can be horrendous, soaking you, the bedding and the bed.
Mood swings, increased irritability and anxiety
Menopausal mood swings can be much more severe than PMS. Hormonal fluctuations also cause increased irritability but both mood and irritability are not helped by other symptoms that leave you feeling uncomfortable and exhausted.   A third of women experience anxiety as part of their menopause and it can be terrifying. Menopausal women are actually more susceptible to panic attacks than almost anyone else. Speaking to a medical professional is vital when dealing with anxiety and/or panic attacks.
Headaches and digestive Issues
Frequent and severe headaches and migraine can aﬀect many women.  As for digestive issues, the indignity never ends. Prepare yourself to experience symptoms such as bloating, indigestion, constipation, diarrhoea, cramps or flatulence.
Body changes
In my house the menopause is called ‘reverse puberty’ and just like adolescence a menopausal woman experiences physical changes. Weight gain is probably the most well known and it’s often accompanied by a change in body shape. Then there’s joint pain, muscle tension, gum problems and a bad taste in the mouth. Other physical problems include itchy skin, hair loss, dizzy spells and vertigo, and rather unsurprisingly, extreme fatigue.
Menopause brain
For many women one of the first signs of menopause is ‘brain fog’ – an inability to concentrate and memory lapses. Many women suﬀer from insomnia and disturbed sleep which does not help improve focus.
Osteoporosis
Bone density can drop by up to 20 per cent after the menopause, which puts you at risk of osteoporosis. Be sure to look after your bones with a healthy balanced diet and calcium supplements.
Depression
Given the physical, mental and emotional challenges presented by ‘the change’ it’s unsurprising that depression is four times more likely to aﬀect women of a menopausal age as opposed to women under 45.
Treatments
Because no two women experience menopause the same way it’s tricky to treat. HRT (Hormone Replacement Therapy) is the best available treatment to alleviate symptoms. Many women are wary about HRT and unduly suﬀer as a result, but the most recent evidence suggests the benefits of HRT outweigh the risks.  Make an appointment with your GP just to discuss your concerns. Some women are unable to avail themselves of HRT for medical reasons.  There are alternative therapies available that doctors can prescribe. There’s also a variety of products available in health shops including herbal remedies such as Evening Primrose Oil, Black Cohosh, Angelica, Ginseng and St. John’s Wort.  Some people swear by herbal remedies and vitamin supplements. If you are taking any other medication do check with your doctor to be sure that herbal supplements won’t interfere with it, or more importantly, that the combination isn’t dangerous.