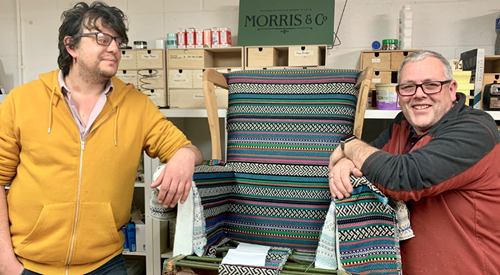 Two masters of a traditional craft decided they needed to spread the intricate skills of their trade, so set up their own school. Gareth Rees and Gregory Cupitt-Jones have more than 50 years’ experience between them as traditional upholsterers. They set up the British School of Upholstered Furniture, in Nettlebed, in 2017. Henley Life’s Cindy Burrowes went along to the school to watch its tutors and students at work.
Gregory (Greg) has run his successful upholstery business, Cottage Upholstery, in a small rural workshop in Nettlebed village, for more than 26 years. During that time he has worked on many historic houses, including those of the Royal Family, and he is also an active member and past chairman of the Guild of Traditional Upholsters, liveryman of the Worshipful Company of Upholders and member of the Association of Master Upholsterers. Greg was previously head tutor of upholstery on the conservation and restoration degree course at Bucks New University, and was awarded his Master Upholders certificate from the Worshipful company of Upholders in 2019. When the
characterful barn next to his workshop came up for lease, Greg went to talk to fellow upholsterer Gareth about turning it into their own school.
Gareth worked and trained in various workshops in England and Wales before setting up his own company in 2005. He is experienced in all aspects from commercial production to high-end traditional restoration and worked predominantly for the trade for dealers, interior designers, collectors, private clients, embassies and museums.
“Greg and I knew each other for years and thought let’s open our own school up rather than teach at other places,“ said Gareth.
“We had a lot of tools and machinery, we advertised and worked on the reputation we had on social media.”
Within four months of launching their own school, the pair had enough students signed up for the first year.
The busy school is currently fitted into a higgledy piggledy old building, over three floors, and it is busy five days a week. There is hope that the school will be moving to bigger premises nearer Henley this year.
Each student undertakes one day a week at the school, over the academic year for the three years of the Association of Master Upholsterers and Soft Furnishers Diploma.
“These are not leisure classes, this is a very structured approach instead and everyone has a set day they come in on,” said Gareth.
“Level 1 (the first year) they focus on very basic things and then move on up to Level 2 which is more traditional work with horse hair rather than foam, for example.”
This traditional working with your hands, and slowly over time, and with practice building a set of skills that results in a recognised diploma enables the students to practise as upholsters either for themselves, or as a cottage industry for others.
“We saw more and more people want to do something with their hands and create something. Most people who do this course don’t necessarily want to be an upholsterer at the end of it, although some do.
“And some channel themselves as a cottage industry and work at home, and those people tend to do very well,” said Gareth, who stressed that there is a resurgence of interest in the traditional side of upholstery, of restoring previously used furniture or traditionally-made pieces.
“We want people to create chairs that are usable, it is a skilled trade. Everybody has to sit down. Go into any room in the country, people are sitting down. Upholstery is an essential skill,” said Gareth, stressing that factory-made furniture does get some government support for training, but not hand-made.
Gareth is clearly also a master communicator and, despite his height, moves easily around the cramped rooms, buzzing with creative enthusiasm. Greg is the quieter master, and the pair clearly work well together, sharing the diﬀerent levels that they teach each year, with Gareth working at the school five days a week and Greg teaching two days.
As I watch the mixed group of students, male and female, younger and older, all professionals in their own fields, filling, and patting and sewing and cutting fabrics for antique chairs and modern pieces I am stunned to hear there is no pre-requisite skill for the diploma. Some of the students hated sewing or had not sewn at all, whereas others were already quite accomplished. Greg believes it makes no diﬀerence because in the first year the students learn the stitches and the basic skills of the craft. Level 2 is when they move on to upholstering a Parker Knowles chair, made in High Wycombe, the home of British chair manufacturing. Level 3 sees students working with more technical skills on a major traditional piece. Former solicitor Juliet Goodman is on Level 2, in her second year at the school. I asked her why she chose it.
“I’ve always had a bit of an interest in traditional craft, partly I suppose because I work at the Landmark Trust and also I had a piece of furniture at home that needed doing,” she said. “I thought originally about doing a weekend course, but when I saw what they were doing I thought, that’s it, I am going to do it. And it is so interesting, so far beyond anything that I ever imagined, you learn furniture history, textiles, diﬀerent techniques, modern and traditional and I love the traditional more.
“It is just fantastic. The people that I have met are fabulous from the film industry to textiles and they are doing it for diﬀerent reasons. I think I may end up doing this as a second career.”
For information on the courses oﬀered by Greg and Gareth go to www.britishschoolofupholsteredfurniture.co.uk