Renee had a little lamb... 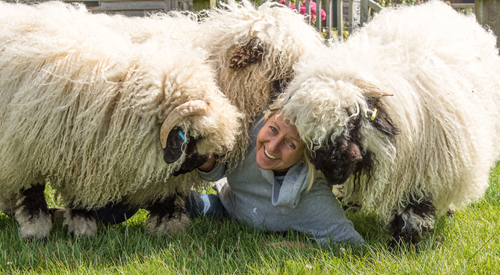 Amanda Stewart chats to Renee Snouckaert who, faced with an empty Henley field and the need to make a living, found an adorable flock of very special sheep was the answer...
They’re called the world’s cutest sheep and no wonder - with that adorable black face, clouds of candy floss wool and barely-there eyes who could resist the charms of a Valais Blacknose? Animal lover Renee Snouckaert couldn’t. The search for a rare breed to raise on an empty field she owned outside Henley brought her face to face for the first time with these loveable lambs and it was love at first sight.
“I knew at once I’d found the right breed,” says Dutch-born Renee, 65. There was just one problem – where would she find a fledgling flock of this native breed from Switzerland, where they have been bred for generations for both their meat and their fleeces?
The journey she embarked on gave Renee, from Rotterdam, the help she needed to recover from a divorce and the subsequent tragic death of her ex-husband, property tycoon Paul Castle. But it also provided her with a new business venture which combined her lifelong love of animals with the suddenly urgent need to make a living.
Renee had enjoyed a jet set lifestyle as the wife of a multi-millionaire, hosting hunts for the local meets from their manorial home in Ipsden and indulging the couple’s joint love of horses. Paul was a polo-playing friend of Prince Charles, had owned his own polo team, used a private jet and at one time owned the Michelin starred restaurant The Goose in Britwell Salome, near Watlington. A keen polo player herself, Renee saw her assets reduced to her empty 17-acre field after her husband’s suicide 10 years ago at the age of 54 revealed the failure of his business and the extent of his debts.
“I remember I was sipping coffee one morning after another sleepless night when I saw an advert in the Daily Mail. “A farmer had imported 10 of these sheep from Switzerland – but they were priced at £50k!”
To cheer herself up, Renee took a trip to visit her family in Holland. She says: “The Dutch love their rare breed sheep and I thought I might just see if there were any for sale while I was there.
“Lo and behold, there was an advert from a lady farmer selling her flock of Valais Blacknose sheep. “I jumped straight into the car, trying to contain my excitement, and quickly drove to the farm near Utrecht.”
Renee says her heart was thumping as she arrived and when the sheep came running up to her, she knew at once she had made the right decision. Three months later, Renee welcomed six lambs and two adult sheep to their new Oxfordshire home,  only to find that the ram had made the ewe pregnant on the ‘fruitful and fertile’ journey there. Five months on, Renee’s first lamb was born and she was now officially a sheep breeder.
So began Renee’s enduring love affair with these super cute ‘lawnmowers’ whom she describes as wearing ‘eyeliner and black lipstick’ and on whom she has bestowed names such as Gaga, Gogo, Gucci and Gloriana. Her flock is now known all over the world, she is a respected international breeder and successfully shows her sheep at agricultural events throughout the UK, where she is now a judge. She also launched herself into the artificial insemination business, with the US proving a lucrative market for her flock’s highly-prized sheep semen.
Last year her Henley flock was featured on an edition of the BBC’s Farmers’ Country Showdown, currently showing on Monday afternoons on BBC1. After facing an uncertain future, Renee has written a happy ending to her riches-to-rags-to-riches story and smiles proudly as she says: "And all of it started in an empty field just outside Henley.”