The joy of rowing 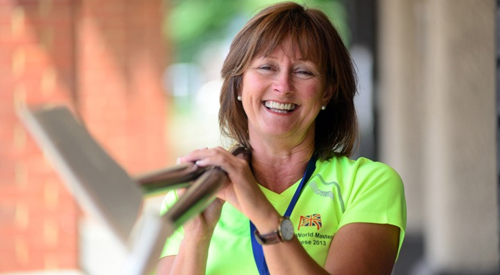 Joy Skipper is a very youthful 60 year old who began her highly successful rowing career at the age of 38.
She is also a nutrionist, recipe developer and food writer, which means she knows just how to look after herself to achieve her world class rowing goals.
Joy moved to Stoke Row four years ago from the city to continue her rowing with Upper Thames Rowing Club, which has a large masters section (rowers over 27 years of age competing against each other in age sections). However, her rowing journey started at Mortlake Rowing Club.
“I lived in Richmond and I used to see them going up and down and I thought that looks really nice,” she said. “I was never competitive in anything before and then I got in a boat and it was just like a switch was flicked and no-one was going to get past me.” And very few people have done since.
In her 43rd year she trained so hard she won every race, although Joy says wryly that she had ‘no life’ that year. However, she clearly still has a huge love for rowing after 22 years of Master’s competitions. And her achievements have not diminished with time – she was a World and British Champion in 2018. Jo competes in various boats, but most notably as a single sculler and a double. It is also worth noting that rowers competing in masters competitions are self-funded, there is no national funding for travel or equipment.
“My father asked me if I had wished I had found rowing earlier and I said yes, Dad, why didn’t you find rowing for me when I was 14?
“But if you are not in the right place at the right time you just don’t,” she said. “Its funny, compared to the girls I row with, who are obviously my age, I still feel like a novice, because they started probably when they were 16.”
However, Joy is a rare beast in being such a successful, competitive master, from such a late start in rowing. “We always used to be made to watch a video ‘the perfect sculling style’ which we all thought we were doing, but then you will see someone who is really fast and they don’t scull anything like that so it is just about how you manage to move the boat,” she said humbly.
Joy is a coach at Goring Rowing Club and she swims the Henley Classic each year, as well as entering world competitions when she feels she has trained enough.
“As a master rower I know I have not trained enough this year to race my single. It is about the amount of training.
“So as a master you get the retired people who can train all day and win. Or there are some people that can just move a boat better,” she said. So she will compete in the European Masters Championships in Austria this summer, in preparation for the World Championships next year, on the same course.